COUPLE – MOMENT OF A COUPLE
What is definition of Couple in engineering mechanics? Define moment of a couple?

The two equal and opposite forces, whose lines of action are different, form a couple, as shown in Fig. 1.4. 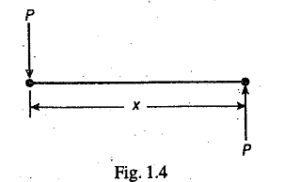 A little consideration will show, that a couple does not produce any translatory motion (i.e. motion in a straight line), but a couple produces a motion of rotation of the body on which it acts.