LIMITING ANGLE OF FRICTION
Limiting Angle of Friction is defined as the angle which the resultant reaction (R) makes with the normal reaction (RN). 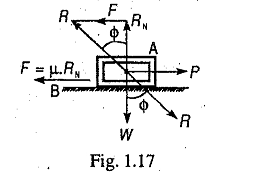 In the limiting case, when the body just begins to move, it is in equilibrium under the action of the following three forces :

The reaction R must, therefore,be equal and opposite to the resultant of W and P and will be inclined at an angle (ϕ) to the normal reaction (RN). This angle ϕ is called the limiting angle of friction or simply angle of friction. From Fig. 1.17, we find that