Uttarakhand is the best tourist state in the India. In this state there is lot of tourist destinations and places where you can go and make your time very funny and cool with lot of enjoyments. The beauty of this state is there big forests, animals, rivers, high mountains, temples, waterfall, swimming and rafting destinations and much more.

The region was originally settled by Kol people, an aboriginal people of the Austro-Asiatic physical type who were later joined by the Indo-Aryan Khasas tribe that arrived from the northwest by the Vedic period (1700–1100 BCE). At that time, present-day Uttarakhand also served as a habitat for Rishis and Sadhus. It is believed that the sage Vyasa scripted the Hindu epic Mahabharata in the state. 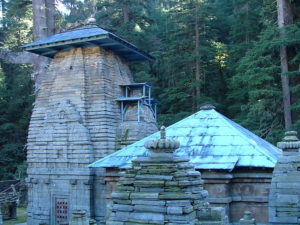 Among the first major dynasties of Garhwal and Kumaon were the Kunindas in the 2nd century BCE who practised an early form of Shaivism and traded salt with Western Tibet. It is evident from the Ashokan edict at Kalsi in Western Garhwal that Buddhism made inroads in this region. Folk shamanic practices deviating from Hindu orthodoxy also persisted here. However, Garhwal and Kumaon were restored to nominal Hindu rule due to the travails of Shankaracharya and the arrival of migrants from the plains. Between the 4th and 14th centuries, the Katyuri dynasty dominated lands of varying extent from the Katyur (modern day Baijnath) valley in Kumaon.

QUESTION (8)  At which place does river Bhagirathi merge with Alakananda?
(A) Rudra Prayag,
(B) Tehri,
(C) Dev Prayag,
(D) None of these
Answer: (C)

QUESTION (9)  In which district of Uttarakhand, Lakha Mandal is situated?
(A) Dehradun,
(B) Rudraprayag,
(C) Nainital,
(D) Haridwar
Answer: (A)

QUESTION (13)  Vishnugarh Pipalkoti Hydel Power Project is being developed on one amongst the following rivers?
(A) Ganga,
(B) Alaknanda,
(C) Yamuna,
(D) None of these
Answer: (B)

QUESTION (14)  Which one of the following is known as the queen of hills of Uttarakhand?
(A) Mussoorie,
(B) Ranikhet,
(C) Srinagar,
(D) Badri Nath
Answer: (A)