Lami’s Theorem states that if three coplaner forces acting at a point be in equilibrium, then each force is proportional to the sine of the angle between the other two forces. 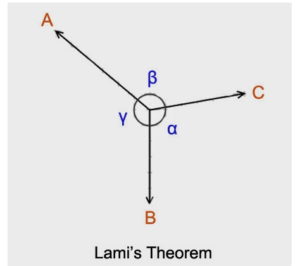 Consider three forces A, B, C acting on a particle or rigid body making angles α, β and γ with each other .